Let’s get something out of the way, I’m a rom-com fanatic and I’m not slightly embarrassed to admit it. Why would I be? Sure, rom-coms get a bad name for being over-the-top cheesy and unrealistic, but HEY… I’m reading a book, it’s meant to be unrealistic, that’s why it’s called fiction.

In saying that, like all things… There’s the good and the bad, and life’s too short to read bad rom-coms. Here are some of the best romantic comedy books out there. They will definitely brighten up your day, put a smile on your face, and pull at your heart strings. Oh and some of them can get pretty hot and heavy too, so enjoy 😉

THE KISS QUOTIENT by Helen Hoang

Stella Lane thinks math is the only thing that unites the universe. She comes up with algorithms to predict customer purchases—a job that has given her more money than she knows what to do with, and way less experience in the dating department than the average thirty-year-old.

It doesn’t help that Stella has Asperger’s and French kissing reminds her of a shark getting its teeth cleaned by pilot fish. Her conclusion: she needs lots of practice—with a professional. Which is why she hires escort Michael Phan. The Vietnamese and Swedish stunner can’t afford to turn down Stella’s offer, and agrees to help her check off all the boxes on her lesson plan—from foreplay to more-than-missionary position…

Before long, Stella not only learns to appreciate his kisses, but crave all of the other things he’s making her feel. Their no-nonsense partnership starts making a strange kind of sense. And the pattern that emerges will convince Stella that love is the best kind of logic…

LOVE HER OR LOSE HER by Tessa Bailey
See my review HERE. 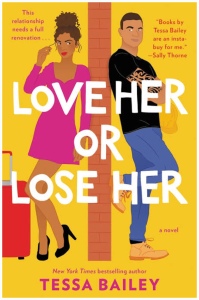 Rosie and Dominic Vega are the perfect couple: high school sweethearts, best friends, madly in love. Well, they used to be anyway. Now Rosie’s lucky to get a caveman grunt from the ex-soldier every time she walks in the door. Dom is faithful and a great provider, but the man she fell in love with ten years ago is nowhere to be found. When her girlfriends encourage Rosie to demand more out of life and pursue her dream of opening a restaurant, she decides to demand more out of love, too. Three words: marriage boot camp.

Never in a million years did Rosie believe her stoic, too-manly-to-emote husband would actually agree to relationship rehab with a weed-smoking hippie. Dom talking about feelings? Sitting on pillows? Communing with nature? Learning love languages? Nope. But to her surprise, he’s all in, and it forces her to admit her own role in their cracked foundation. As they complete one ridiculous—yet surprisingly helpful—assignment after another, their remodeled relationship gets stronger than ever. Except just as they’re getting back on track, Rosie discovers Dom has a secret… and it could demolish everything.

THE HATING GAME by Sally Thorne

Lucy Hutton, baker-of-cakes, exemplary assistant and professional ‘nice girl’, is waging war. She’s got the whole office on her side – except for tall, dark and charmless Joshua Templeman. He’s been nothing but hostile since the moment they met and now it feels like nothing matters as much as taking him down.

Trapped together under the fluorescent lights, they become entrenched in an addictive rivalry. There’s the Staring Game, The Mirror Game, The HR Game. Lucy can’t let Joshua beat her at anything, especially when a huge promotion comes up for grabs.

Finally she’s going to destroy the man she can’t seem to get out of her office, the man she hates, the man who’s taking up far too much space in her head. If Lucy wins, she’ll be Joshua’s boss. If she loses, she’ll resign. The race is on – but the real games have only just begun . . . 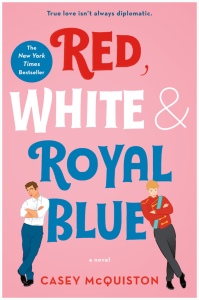 When his mother became President, Alex Claremont-Diaz was promptly cast as the American equivalent of a young royal. Handsome, charismatic, genius-his image is pure millennial-marketing gold for the White House. There’s only one problem: Alex has a beef with the actual prince, Henry, across the pond. And when the tabloids get hold of a photo involving an Alex-Henry altercation, U.S./British relations take a turn for the worse.

Heads of family, state, and other handlers devise a plan for damage control: staging a truce between the two rivals. What at first begins as a fake, Instragramable friendship grows deeper, and more dangerous, than either Alex or Henry could have imagined. Soon Alex finds himself hurtling into a secret romance with a surprisingly unstuffy Henry that could derail the campaign and upend two nations and begs the question: Can love save the world after all? Where do we find the courage, and the power, to be the people we are meant to be? And how can we learn to let our true colors shine through?

THE UNHONEYMOONERS by Christina Lauren

Olive is always unlucky; her identical twin sister Ami, on the other hand, is probably the luckiest person in the world. About to marry her dream man, her entire wedding has been fully paid for by winning a series of competitions. Meanwhile, Olive is forced to play nice with her sworn enemy: the best man, Ethan.

But Olive’s luck may be on the turn . . . When the entire wedding party – except for Olive and Ethan – gets food poisoning, there’s an all-expenses-paid honeymoon in Hawaii up for grabs. Putting their mutual hatred aside for the sake of a free holiday, Olive and Ethan head for paradise, determined to avoid each other at all costs. But when Olive runs into her future boss, the little white lie she tells him threatens to spiral out of control.

Forced to play loving newlyweds, she and Ethan find themselves in much closer proximity than they ever expected . . . The problem is that soon, Olive finds that maybe she doesn’t mind pretending. In fact, she’s beginning to feel kind of . . . lucky.

THE FLATSHARE By Beth O’Leary

Tiffy Moore needs a cheap flat, and fast. Leon Twomey works nights and needs cash. Their friends think they’re crazy, but it’s the perfect solution: Leon occupies the one-bed flat while Tiffy’s at work in the day, and she has the run of the place the rest of the time.

But with obsessive ex-boyfriends, demanding clients at work, wrongly imprisoned brothers and, of course, the fact that they still haven’t met yet, they’re about to discover that if you want the perfect home you need to throw the rulebook out the window… 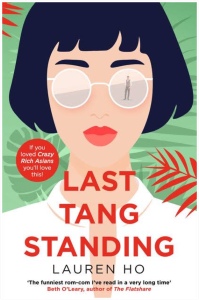 Like all good Chinese children, Andrea Tang is doing her best to fulfil all her mother’s plans for her life: she’s on track to become partner at a top law firm in Singapore, she has a beautiful apartment in the right postcode and a perfect boyfriend who is practically made of husband material.

Except that those plans are unravelling fast: there’s an unfairly attractive new lawyer out to steal her promotion, she has credit-card debt up to her eyeballs, her perfect boyfriend is now her perfect ex-boyfriend and the last single cousin in her family just got engaged, leaving her exposed to romantic meddling on all sides…

For fans of Crazy Rich Asians and Bridget Jones’s Diary comes a hilarious story of love, friendship and the most intrusive people in the world: family.

YOU HAD ME AT HOLA by Alexis Daria
See my review HERE.

After a messy public breakup, soap opera darling Jasmine Lin Rodriguez finds her face splashed across the tabloids. When she returns to her hometown of New York City to film the starring role in a bilingual romantic comedy for the number one streaming service in the country, Jasmine figures her new “Leading Lady Plan” should be easy enough to follow—until a casting shake-up pairs her with telenovela hunk Ashton Suárez.

After his last telenovela character was killed off, Ashton is worried his career is dead as well. Joining this new cast as a last-minute addition will give him the chance to show off his acting chops to American audiences and ping the radar of Hollywood casting agents. To make it work, he’ll need to generate smoking-hot on-screen chemistry with Jasmine. Easier said than done, especially when a disastrous first impression smothers the embers of whatever sexual heat they might have had.

With their careers on the line, Jasmine and Ashton agree to rehearse in private. But rehearsal leads to kissing, and kissing leads to a behind-the-scenes romance worthy of a soap opera. While their on-screen performance improves, the media spotlight on Jasmine soon threatens to destroy her new image and expose Ashton’s most closely guarded secret. 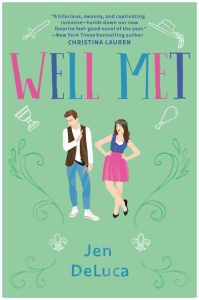 Emily knew there would be strings attached when she relocated to the small town of Willow Creek, Maryland, for the summer to help her sister recover from an accident, but who could anticipate getting roped into volunteering for the local Renaissance Faire alongside her teenaged niece? Or that the irritating and inscrutable schoolteacher in charge of the volunteers would be so annoying that she finds it impossible to stop thinking about him?

The faire is Simon’s family legacy and from the start he makes clear he doesn’t have time for Emily’s lighthearted approach to life, her oddball Shakespeare conspiracy theories, or her endless suggestions for new acts to shake things up. Yet on the faire grounds he becomes a different person, flirting freely with Emily when she’s in her revealing wench’s costume. But is this attraction real, or just part of the characters they’re portraying?

This summer was only ever supposed to be a pit stop on the way to somewhere else for Emily, but soon she can’t seem to shake the fantasy of establishing something more with Simon or a permanent home of her own in Willow Creek.

THE PROPOSAL by Jasmine Guillory

When someone asks you to spend your life with him, it shouldn’t come as a surprise—or happen in front of 45,000 people.

When freelance writer Nikole Paterson goes to a Dodgers game with her actor boyfriend, his man bun, and his bros, the last thing she expects is a scoreboard proposal. Saying no isn’t the hard part—they’ve only been dating for five months, and he can’t even spell her name correctly. The hard part is having to face a stadium full of disappointed fans…

At the game with his sister, Carlos Ibarra comes to Nik’s rescue and rushes her away from a camera crew. He’s even there for her when the video goes viral and Nik’s social media blows up—in a bad way. Nik knows that in the wilds of LA, a handsome doctor like Carlos can’t be looking for anything serious, so she embarks on an epic rebound with him, filled with food, fun, and fantastic sex. But when their glorified hookups start breaking the rules, one of them has to be smart enough to put on the brakes…

What is your favourite Romantic Comedy Book? Have you read any of these? What were your thoughts? Or if you haven’t, will you be picking any of them up? Let me know your thoughts in the comments below.

Until we meet again, stay beautiful and happy reading!

Welcome to my little corner of the internet. I am Loi, a beauty addict and book fanatic. 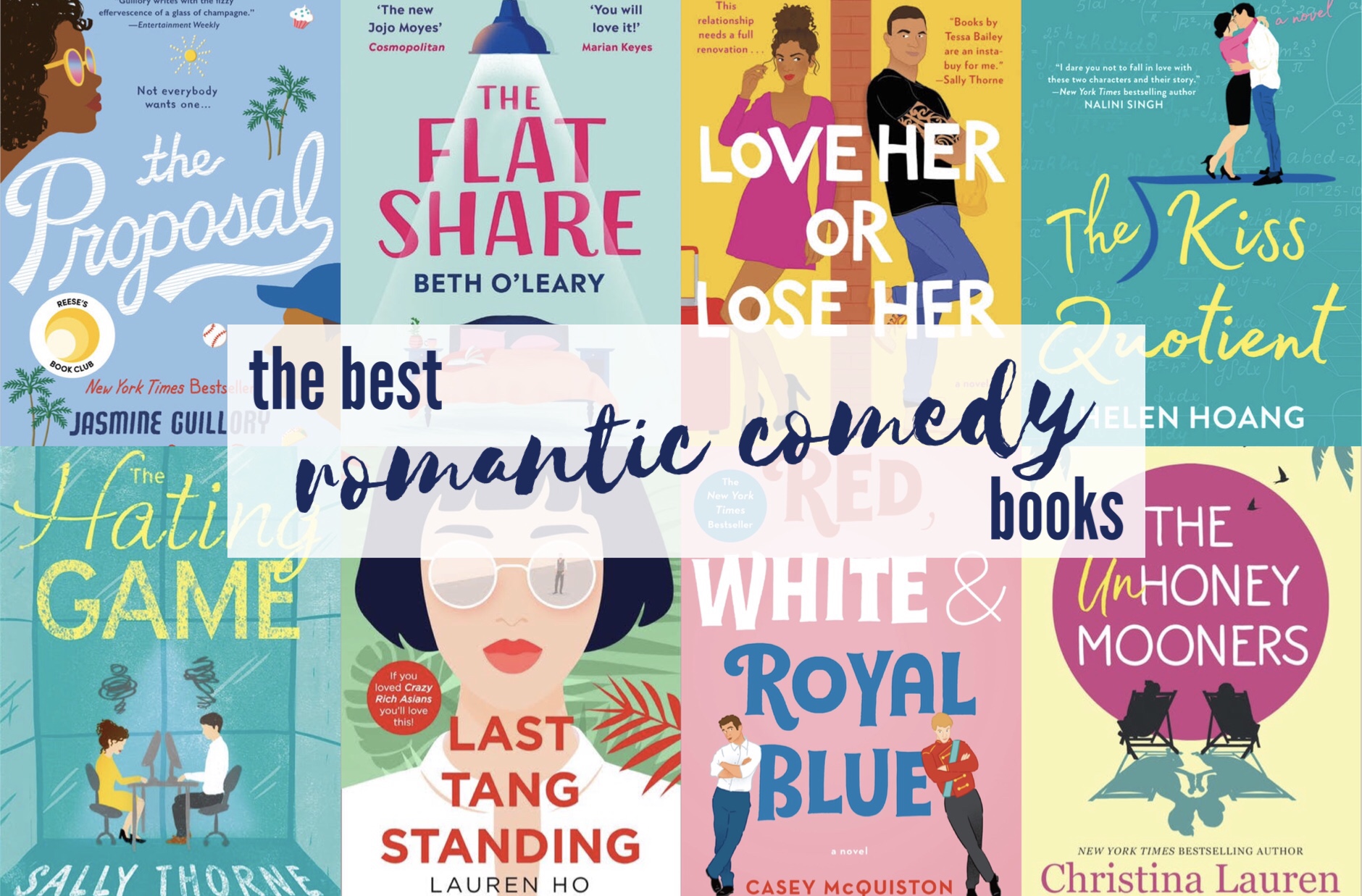 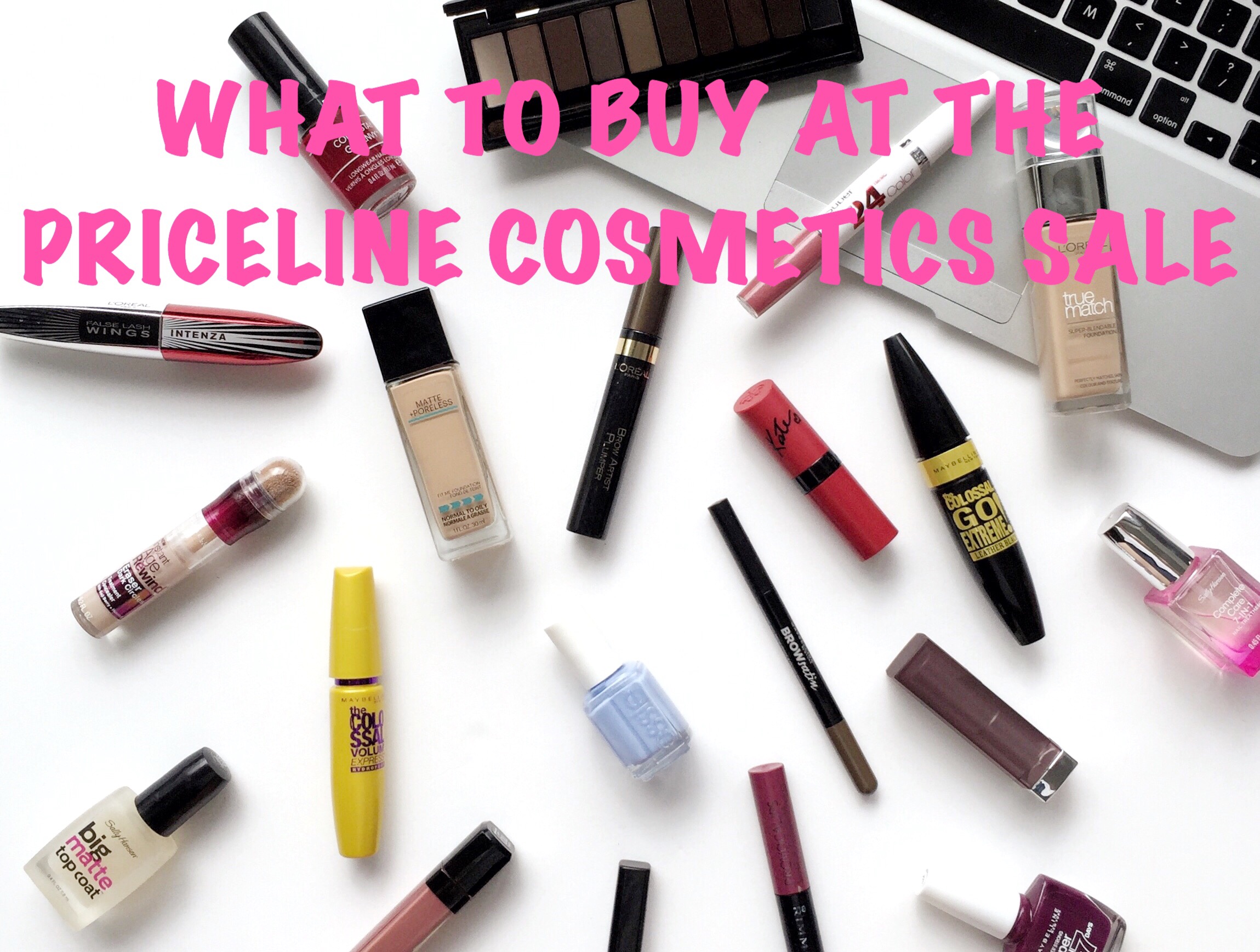 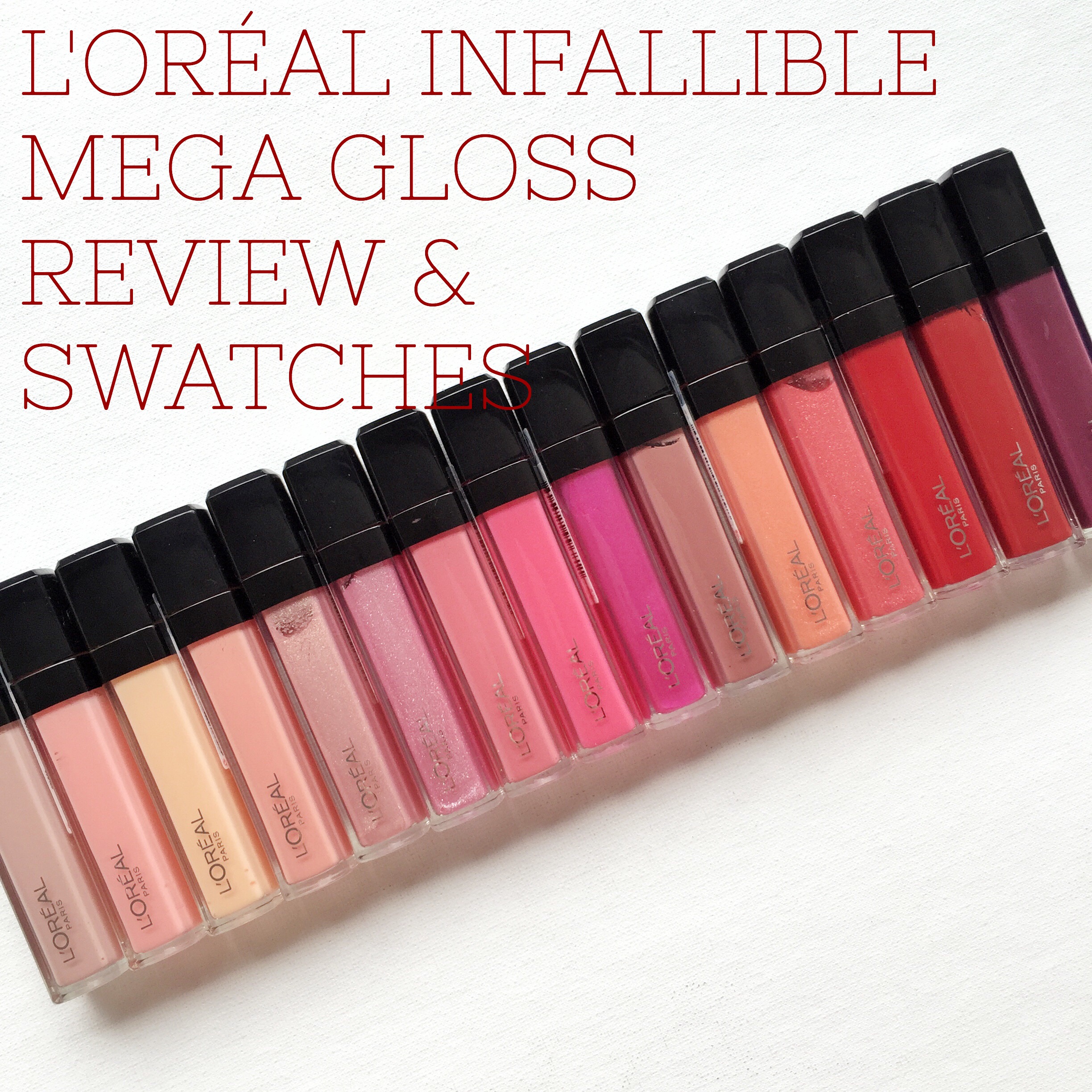